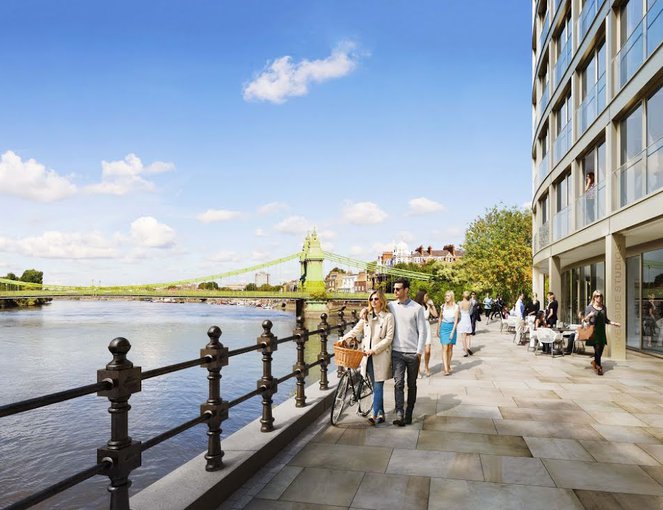 Queen’s Wharf in Hammersmith, W6, is a joint venture from Mount Anvil and FABRICA by A2Dominion.

This sophisticated, dynamic mixed-use development of 165 studio, one, two and three-bedroom apartments and penthouses is now over 80% sold. At just eight stories high, Queen’s Wharf overlooks the Grade II listed Hammersmith Bridge and the slow-moving, unspoilt 'Surrey Bend' of the River Thames.

On-site amenities range from two state-of-the-art television studios, a 200 seat cinema and theatre at the all new Riverside Studios, to a dedicated 24-hour concierge, residents-only rooftop terrace, and a range of bars and restaurants.

Cosmopolitan, connected and picturesque, Hammersmith is fast becoming one of London’s most desirable districts for homeowners and investors. From upcoming regeneration plans and a strong resale market to an enviable lifestyle and long walks along the Thames path, here are our top 10 reasons to buy in Hammersmith.

1. Investment & the Hammersmith masterplan
Already vibrant and affluent, Hammersmith is poised for significant investment and large-scale regeneration. The local authority has identified the potential for 10,000 new jobs in the area through a proposed remodelling of Kings Mall, the creation of new office space and improved arts, independent retail and leisure facilities. Beyond Hammersmith town centre the extended regeneration work will incorporate new cycle and pedestrian access to the Thames, new public spaces and parks, and improvements to transport infrastructure.


3. Strong rental & resale demand
Demand in Hammersmith is underpinned by its outstanding connections to central London and Heathrow, great schools and picturesque riverside setting. Hammersmith also suffers from a shortage of high-quality new build homes; particularly on its waterfront. Queen’s Wharf occupies a prime riverside location overlooking Hammersmith Bridge, with many of its homes enjoying truly panoramic views across the Thames.

It’s a great time to buy in London, as a low Bank of England base rate offers investors and new homeowners the opportunity to commit to long-term fixed-rate mortgage deals. Improved market confidence has resulted in the increased availability of mortgage products, and competition between providers is resulting in some great offers. Investors from overseas, particularly those that are dollar-linked, are also benefiting from relatively cheaper prices thanks to the recent drop in sterling against other currencies.

5. Excellent rental market
Hammersmith’s rental market is buoyant and the area enjoys robust demand thanks to its relaxed riverside lifestyle offering and proximity to the City and central London. Rental prices are climbing - they’re over 4% up on last year - and, due to the strength of sale prices, average yields in the borough are currently around 3.5% (CBRE, 2016). Tenants here include affluent young professionals drawn to the cosmopolitan lifestyle, and well-heeled families taking advantage of the area’s world-class schools and green spaces.

6. Employment opportunities for tenants & owners
With its excellent public transport connections, proximity to the City and Heathrow, and road access to the M4 tech corridor, Hammersmith is ideally placed for business. Global organisations including Disney, Sony Ericsson, Coca Cola and L'Oréal have HQs in the neighbourhood, and Hammersmith boasts a wealth of high-end, tech-enabled office space in landmark buildings such as the Ark Building and new additions 10 & 12 Hammersmith Grove. Forthcoming investment in office space and infrastructure will see further big names moving to Hammersmith.

7. Incredible riverscape views
Hammersmith boasts some of London’s finest riverside aspects - though few can compete with Queen’s Wharf’s breathtaking views across the water. The slow-moving Thames, with its lazy procession of rowers, small boats and birds, provides an ever-changing backdrop to life here.

9. Green spaces & the outdoors
Hammersmith boasts a wealth of public parks and green spaces, including the expansive, 32 acre Ravenscourt Park, beautiful Brook Green, and Furnival Gardens - a beautiful stretch of open parkland alongside the river just minutes on foot from Queen’s Wharf. Hammersmith residents also enjoy easy access to the Thames Path for walking, running or cycling along the river - the new walkway at Queen’s Wharf will allow riverside walks to Chiswick, Barnes and beyond.

10. Entertainment & culture
The new Riverside Studios, based on site at Queen’s Wharf, will be a landmark, future-facing new centre for the arts in west London. It will boast a cinema, an intimate screening room, theatre spaces, arts galleries and much more. Hammersmith also benefits from many other cinemas, theatres, contemporary and historic art galleries, intimate museums and live music venues. Highlights include the world-famous Hammersmith Apollo and the Lyric Theatre.

Sport also has a firm place in Hammersmith’s culture - most notably the annual spectacle of the Oxford and Cambridge University Boat Race which passes the Surrey Bend at Queen’s Wharf each year.