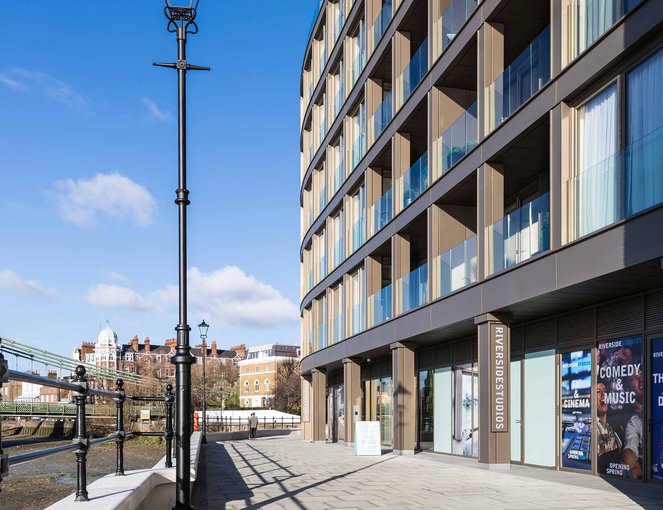 The Return of an icon: Riverside Studios reopens at Queen’s Wharf

Hammersmith’s legendary Riverside Studios is back and better than ever. Sat at the heart of our Queen’s Wharf development, it’s been reimagined as a new multi-million-pound arts centre – and its doors are opening to the public for the first time. Read more below. Read more below.

Five years ago, Riverside Studios – the original home of Doctor Who and the first studio in London to broadcast television in technicolour – closed for redevelopment as part of the Queen’s Wharf project. We’ve rebuilt this much-loved studio as a world-class arts hub for Hammersmith, celebrating independent theatre, cinema and digital media.

As its three-phase reopening begins, it’s time to meet the new Riverside Studios. And, like so many icons of the showbiz world, it’s had more than just a facelift.

This new cultural centre boasts three new studios for television, theatre and music. They’ll be used to present exhibitions, and independent film and theatre that champion both established and emerging voices.

For the first time in its 86-year history, the public will be able to enjoy Riverside Studios and its unique position on the Thames alongside Hammersmith Bridge. The development also includes rehearsal spaces, new bars and restaurants, and a new river walkway.

William Burdett-Coutts, Riverside Studios’ Artistic Director, said “To see Riverside Studios reopen its doors to the public is the culmination of a dream.  Whilst the old building held an extremely fond place in the hearts of people across the arts, television and film worlds […] the new building combines all these interests into a fantastic new public facility which can realise the potential for this incredible site in London.”

As well as serving west London, Riverside Studios is committed to making the arts more widely accessible. Key to that mission is its digitally enabled performance areas, designed to allow recording or transmitting of live work to a global audience.

This reopening also marks the arrival of a great new contributor to Hammersmith’s riverside. Among the first facilities to open at Riverside Studios are the Studio 8 Café and Bar, as well as Sam’s Riverside, a new high-end brasserie by Sam Harrison.

These will be followed early in 2020 by the centre’s flagship 450-seat television studio, Studio 1, and its new state-of-the-art cinema, complete with its own bar. March 2020 will see the opening of Studio 2, a flexible 500-seat performance space, and Studio 5, a rehearsal room that will also host community events and workshops.

Interested in delivering more than just amazing homes for Londoners? We create outstanding places where people can thrive, and we’d love your help doing it. Find out more about our working culture and browse current vacancies now on our careers page.