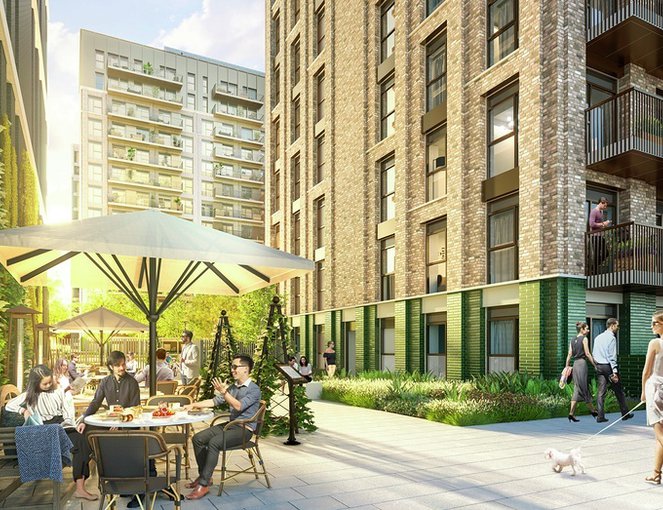 Business has always been at the heart of life at the Royal Docks. Driven by massive inward investment, and the creation of new office, retail and leisure space supporting 60,000 jobs, this sprawling waterside district is once again about to take centre stage in the business life of the capital. Read more below. Read more below.

London’s gateway to global trade for centuries, the Royal Docks is transforming fast – a huge area of east London set to re-emerge as a globally significant commercial centre with a range of cultural attractions, leisure facilities and homes. With a £314m investment package approved by the Mayor of London in June 2018, and £8bn of investment coming to the area over the next 20 years, this new chapter in Royal Docks history is the most exciting yet.

The Royal Docks is uniquely placed at the meeting point of two key growth corridors and an Opportunity Area – a neighbourhood benefitting from government investment to improve social mobility. It’s also home to London’s only Enterprise Zone.

Enterprise Zones are a flagship part of the government’s industrial strategy – areas that encourage significant inward investment and rapid growth by offering tax breaks, relaxed regulations and other incentives. They’re engines of the British economy, built for business, and the Royal Docks is one of only 48 in the country.

The Royal Docks Enterprise Zone is a 300+-acre area of the Royal Docks that, in the coming years, will firmly establish itself as London’s third key business district, alongside the City and nearby Canary Wharf.

It's already a magnet for businesses, with industry leaders including Tate & Lyle, Siemens Crystal, ExCeL London and the University of East London based here.

Planning has been secured that will deliver another 7 million sq ft of commercial space and generate 60,000 new jobs over the coming 20 years.

THE ROYAL DOKCS WILL BE LONDON'S THIRD FINANCIAL CENTRE

East London’s Docklands have always been pivotal to global commerce in the capital. Formerly home to both the legendary East India Company and the largest port in the world, the Docklands were largely neglected following the decline of the manual shipping industry through the 1960s and 70s.

But the rebirth of key sites in recent decades (including nearby Canary Wharf and the Royal Docks), along with the establishment of the Royal Docks Enterprise Zone, has created big incentives for global businesses and start-ups alike to relocate to the area. The Royal Docks is ready to retake its rightful place as a globally significant financial and business destination for the 21st Century.

Central to the transformation of the Royal Docks is the development of the Royal Albert Dock, which is Chinese business park specialist ABP’s first scheme outside of China. Royal Albert Dock is a 4.7 million sq ft project which will create up to 30,000 jobs in the area and generate £6bn for the local economy.

Well-connected to Canary Wharf, the Royal Docks also boasts world-class exhibition and conference space nearby in the shape of ExCeL London, as well as large-scale events space at Greenwich’s O2 Arena.

The Royal Docks already enjoys fast connections with the capital by river, road and rail, via river taxis and the DLR – but the area’s connections are about to step up a gear.

As well as a projected £600m TfL investment in the DLR, the arrival of Crossrail in 2020 will see the Elizabeth line connect to Custom House. The Royal Docks will offer improved connections with the rest of London – including to Liverpool Street in 10 mins, Tottenham Court Road in 15 mins, and Heathrow Airport in 52 mins.

Local businesses and residents may not need to travel via Heathrow though, as London City Airport, on the Royal Docks’ doorstep, is embarking on a £500 million expansion. Once complete, the work will see the airport’s routes extended to include links with the Middle East and North America, and its capacity increased by more than two million passengers a year.

There are a whole range of ways to get around too – from the DLR and waterside cycling routes to connections to Greenwich via the Emirates Air Line, London’s only cable car.

LIFE ON THE ROYAL DOCKS

The Royal Docks isn’t all about business. As well as being set to become an internationally renowned commercial district and visitor destination, the area’s new dockside developments and villages will offer an unbeatable London lifestyle at the water’s edge.

Royal Docks residents will enjoy some of the Capital’s best facilities for water sports and wild swimming in the area’s 250 acres of water. The area will include studios, makers’ spaces, co-working facilities, waterfront bars and restaurants, landscaped parks, a new cultural centre for east London, and maybe even a high-tech new Thames shipyard.

This area is emerging as one of the most exciting places to work, play and live in London.